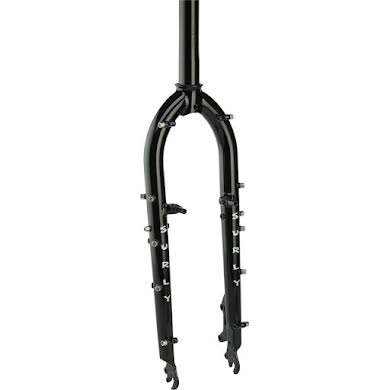 choose a size and color above to show stock
FREE SHIP
Leaves Next Mon.
The Troll Fork is the same fork included with the 2nd generation Surly Troll frameset or complete bike that is designed for a non-suspension corrected rigid fork.

The Troll is designed to be a workhorse and the fork shares a lot of the same features that make the frame so great. What to run rim brakes? The Troll Fork will do it along with tabs disc brakes which is a rare feature on modern forks.

With the Troll being in the touring line-up for Surly you know it has to be able to run racks and it does. Surly includes upper, mid and lower braze-ons and with 3-bolt Anything Cage mounts. The lower braze-ons are placed so that they do not interfere with the disc caliper.

Surly's long-standing motto is FFF (Fatties Fit Fine) so you should expect this fork to fit larger tires, but what is a big tire for a touring bike? 2.5" like the Surly ExtraTerrestrial sure it will fit, in fact, you can run a tire as large as a 26x3.0" on 50mm rims.

This Troll fork has not been suspension corrected and would affect the way your bike handles for the worse.