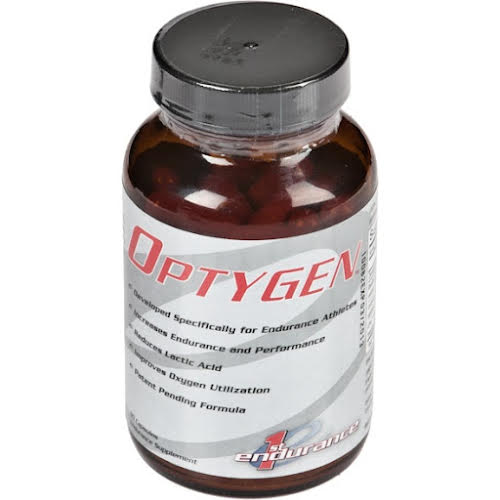 The ingredients in Optygen have been studied extensively for their ability to: Reviews:
"Optygen is the hot Supplement." - Bicycling Magazine (December 2003)

Optygen was ranked the #1 Endurance Product by an independent research firm (Supplementwatch.com) that evaluated the most popular endurance supplements on the market. All of the products were evaluated based on: Claims, Theory, Science, Safety and Value.

Optygen is a "legal, pure and effective pill worth considering if you''re a competing athlete." -Procycling (September 2002)

"Optygen utilizes two natural herbs (Rhodiola and Cordyceps) that are the primary ingredients in the legal and stimulant free formulation. Both Rhodiola and Cordyceps have been clinically shown to increase VO2Max, lung function, oxygen intake and anaerobic threshold significantly." -Cycle Sport (July 2003)

"All of the ingredients in Optygen have scientific support for their effects in better fat-burning and improved oxygen uptake." -Mountain Bike Magazine (March 2003)

How Optygen Works:
Optygen works on three different levels all working synergistically with the goal of increasing endurance. Endurance is defined your ability to perform work over a period of time where there is sufficient oxygen delivered to the muscles. There are three critical components necessary to increase your endurance capacity.

1) Efficient Glucose Metabolism
2) Efficient Oxygen Transfer
3) ATP productionEfficient Glucose Metabolism:
The first part of the Optygen formula utilizes chromium for its ability to break down fuel. Chromium is an essential trace mineral that aids in glucose metabolism, regulation of insulin levels, and maintenance of healthy blood levels of cholesterol and other lipids. Chromium forms part of a compound in the body known as glucose tolerance factor (GTF), which is involved in regulating the actions of insulin in maintaining blood sugar levels and, possibly, in helping to control appetite. It is critical that any drink, bar or pre-race meal consumed prior to a race or exercise gets broken down efficiently in order to maximize your fuel delivery. Insulin spikes or lack of insulin response can cause the nutrients to either be rushed into your bloodstream too quickly or not quickly enough. Chromium regulates this nutrient breakdown so you have equal and sustained nutrient delivery to the working muscles.

Efficient Oxygen Transfer:
The second part of the Optygen formula uses adaptogenic herbs to improve oxygen effeciency. Originally, these two adaptogenic herbs were gathered by Tibetan Sherpas for use in their tea. The Sherpas used these herbs to give them energy to climb Everest, which they did without the use of supplemental oxygen. One of the adaptogenic applications of Rhodiola that has received considerable research attention recently is for aiding in adaptation to high altitude, thus, as a preventive treatment for hypoxia or mountain sickness. In June 2002, Dr Rulin Xiu was awarded a patent for her work showing Rhodiola''s ability to oxygenate blood. Clinical studies on Cordyceps have proven its ability to increase endurance through more efficient enzyme activity, mobilization of free fatty acids and beta-oxidation. In a 1998 study, Dr. Edmond Burke observed that Cordyceps has the ability to improve lactate energy metabolism within the cell. All these mechanisms clearly show how these two adaptogenic herbs improve the efficiency of oxygen transfer in the cell leading to improvements in oxygen uptake and VO2max.

ATP Production:
The final step of the Optygen formulation puts all the necessary components together to assure efficient Adenosine Triphosphate (ATP) production. Clinical research has shown that endurance athletes diminish their ATP stores in exhaustive exercise, which can lead to a reduction in aerobic metabolism and endurance. Optygen''s proprietary ATPro(TM) matrix of five key nutrients is designed to assure ATP production. Since ATP is the final step in aerobic energy production, it is critical that the nutrients feeding the ATP cycle are readily available. Calcium pyruvate, sodium phosphate, potassium phosphate, adenosine and d-ribose all play critical roles in glycolysis and the citric acid cycle, leading to efficient ATP production. Endurance athlete''s VO2max is directly proportional to their ability to efficiently produce ATP.

A synergistic formula:
The combination of the three components of Optygen create a synergy with the sole purpose of improving race performance through increased VO2max, reduced lactic acid and increased endurance. Though Cordyceps and Rhodiola taken by themselves would offer enhanced performance, the combination including Chromium Chelate and the ATPro(TM) matrix complete the formulation. It is this synergistic combination of key ingredients that make Optygen such a powerful and complete endurance formula.

Saratikov AS., Salnik BU., Revina TA 1968. Biochemical Characteristics of the Stimulative action of Rodosine during prescribed muscular workloads. Proceedings of Siberian Department of Academy of sciences of the USSR. Biological Sciences, 5: 108-115.

reviewed by: Buckethead
I had blood tests taken in late spring of 08, purely coincidental that I stumbled upon Optygen 2 days later. My hematocrit at that time was a pretty average 43.5. After 3 months of steady use and continued endurance exercise the next blood test showed a hematocrit of 47! Yeah, yeah, yeah. I've heard the arguments that Hct levels can be adjusted by hydration levels, exercise prior to the test, etc, etc. I only know what I felt. Time to exhaustion had increased by 40-60 minutes and I can't remember feeling like I couldn't give a little more in a sprint while on this supplement. After a horrendous auto accident I'm finally ready to get back to competing (mountain biking and kayaking). I'll try the 1st endurance vitamin this time too. Review to follow.
1

Yes, I would recomend this to a friend.